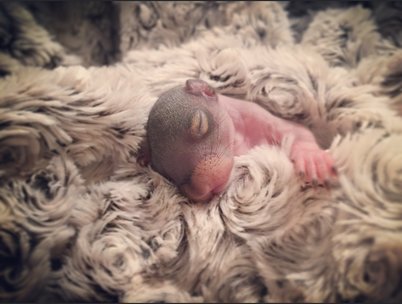 ​Little Thumbelina is an Eastern Grey Squirrel, who was born in a big city, on a frigid March morning. Her Momma's nest was destroyed due to nearby construction, and in a desperate attempt to keep her family safe, she crawled into a 10th story window and gave birth to two tiny babies on a stranger's bed, while he was away at work. She then worked as hard as she could, finding bits of leaves and twigs to bring to 'her new Serta Perfect Sleeper nest.' When the apartment owner arrived home, he was surprised to find two tiny pink babies resting under his pillow, amongst some dried pine needles and branches .

Although we tried for hours to reunite the babies with their Mom, she refused to take them back out into the wild with her. Instead, she relentlessly kept on bringing nesting material back to the bed to surround her babies. After some time, Mom decided she could no longer return, and as Certified Wildlife Rehabbers, we were forced to intervene to save the babies . Although, sadly one sister passed just a few hours later, tiny pink Thumbelina got a second chance to begin her new little life.

Almost all squirrels we take in are rescued and released into the wild, but Thumbelina was a special case. She exhibited delays in the most fundamental wildlife behaviors and developments.  Thumbelina has always been a "different' squirrel". She always progressed a bit slower. Most babies don't care for formula (baby squirrel milk) once they taste solid food, Thumb was a giant baby with a bottle who refused to eat solid food. Most babies open their eyes between 4-5 weeks of age, but our little Thumb waited almost 9 weeks. Most babies can't wait to jump, and climb, and be "a squirrel", not Thumbelina. She alway preferred to walk instead of run, to sit and wait rather than climb or leap, and she only cared to play and interact with her human Mom and Dad. Even when introduced to babies, when she finally opened her eyes, she wanted nothing to do with them. She would not interact with the new babies. Instead, she'd go sleep by herself, she refused to play with the other babies, and became very stressed in their presence.

Thumbelina simply never developed that "squirrel spark" - that unexplainable thing that makes a baby squirrel wild and ready to go out into the world and be able to survive. She's slower, less reactive, and HATES the cold weather. She doesn’t climb or jump well, and is a bit clumsy. She does not have a strong grip, which is crucial when navigating through trees high above the ground. But, she's unique in every little way. She's simply Thumbelina.

However, this was all NOT NORMAL, even in most non-releasable squirrel cases. After being assessed by a local wildlife vet, it was decided she would not be able to live safely in the wild. Thumbelina has always been on a very specific, strict diet, specific to non-releasable squirrels. Despite this, for some reason, she has always had some trouble managing her weight. In October of 2018, after months of testing, we discovered she had hormonal imbalance. Low progesterone in her body was causing Polycystic Ovarian Syndrome, Endometriosis, enlarged uterus, lots of swelling and discomfort, as well as weight gain. In November 2018, Thumbelina had a full hysterectomy. Although it has been a slow and difficult recovery, she is feeling so much better. She is finally back to her happy, loving, playful little self, and we could not be more grateful. Thumbelina continues to struggle with Endocrine issues, and always will. She also suffers with bouts of Alopecia around her belly. We are continuously working closely with her amazing veterinary doctor to keep her at a controlled weight and to be sure she is as healthy and happy as possible. Release is never out of the question, but for now, she has a long way to go.

We hope that Thumbelina can help people to understand how important it is to respect and be kind to all wildlife, and spread the message - "Each little life is big to the one living it." 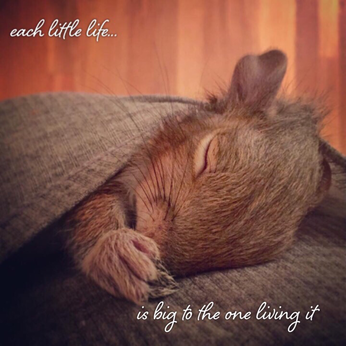